Survive below the seafloor

Foraminifera, an ancient and ecologically highly successful group of marine organisms, are found on and below the seafloor. LMU geobiologists report that several species not only survive, but thrive, in these oxygen-free sediments.

Foraminifera are unicellular marine organisms that are found on and within seafloor sediments. Most species construct porous mineralized shells and capture prey by extending cytoplasmic filaments though these pores. The group is highly species rich, and their preserved fossilized remains show that they were already present in the oceans at the beginning of the Cambrian Era, 560 million years ago. Their shells have considerable fossilization potential, which explains why they serve as index fossils for the dating of a number of geological eras. Moreover, foraminifera are of great ecological significance – owing to their contributions to carbon and nitrate cycles, for instance – and their shells play an important role in the reconstruction of ancient climates. However, despite their well-established status as proxies for environmental conditions, relatively little is known about the biology of contemporary species of foraminifera. LMU geobiologists led by Professor William Orsi of the Department of Earth and Environmental Sciences and the GeoBio Center at LMU, in cooperation with Raphaël Morard and Michal Kucera (Bremen University), have now investigated their metabolism at the molecular level, and found that some species of foraminifera can survive – and indeed thrive – in oxygen-free (anoxic) habitats that would be deadly for other eukaryotes. The results of the new study appear in The ISME Journal. 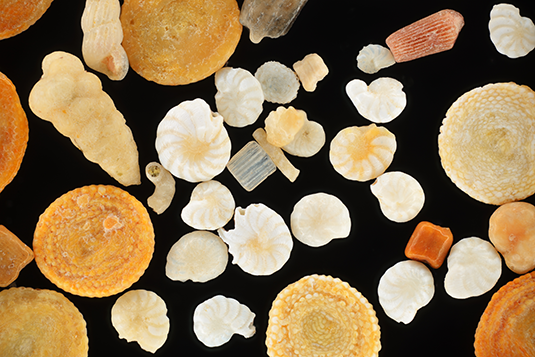 Foraminifera have been previously found in oxygen-poor and even anoxic marine sediments. To learn more about the adaptations that enable them to survive in this inhospitable environment, Orsi and his team examined species sampled from a sediment core recovered from the seafloor off the coast of Namibia. Much of the sediment in this core was anoxic and rich in the toxic gas hydrogen sulfide. Nevertheless, the team found large numbers of Foraminifera at these levels, where they had more than 10 times higher activity compared to the shallower sections with higher levels of oxygen. “Up to now, marine biologists have assumed that, under such conditions, Foraminifera manage to survive on the seafloor and die when they are buried beneath it,” says Orsi. “Our results, on the other hand, surprisingly demonstrate that some species of Foraminifera are metabolically more active in anoxic sediments.” In other words, it looks as if these organisms are just not eking out a living in these habitats, they appear to be very well adapted to the challenging conditions. Moreover, incubation experiments confirmed their preference for anoxic environments, whereby the activity of the Foraminifera increased up to 40 times in anoxic conditions.

Orsi and his colleagues went on to study the metabolic pathways employed by these foraminiferan species by analyzing the messenger RNAs (mRNAs) found in sediment samples. mRNAs are copied from genomic DNA, and encode the instructions for the synthesis of the proteins required for cell function. They therefore allow one to identify the set of genes that are active in the local cell population, and the spectrum of biochemical activities required for cellular metabolism in a given environment. In this case, the analyses revealed that foraminifera make use of a variety of metabolic pathways – for the fermentation of sugars and amino acids, for instance. In addition, they show that, in addition to capturing and digesting prey, foraminifera in the anoxic zones can exploit soluble organic material as a source of carbon and energy. “Presumably, foraminifera play an important and hitherto overlooked role in anaerobic nutrient cycles,” says Orsi. This ability to thrive in such otherwise inhospitable anoxic environments with high levels of toxic hydrogen sulfide gas could be part of the explanation for their ecological success. After all, the group has managed to avoid a number of mass extermination events over the past 500 million years – many of which were associated with a marked reduction in the availability of oxygen and accumulation of toxic hydrogen sulfide that was responsible for killing off numerous now extinct animal species.