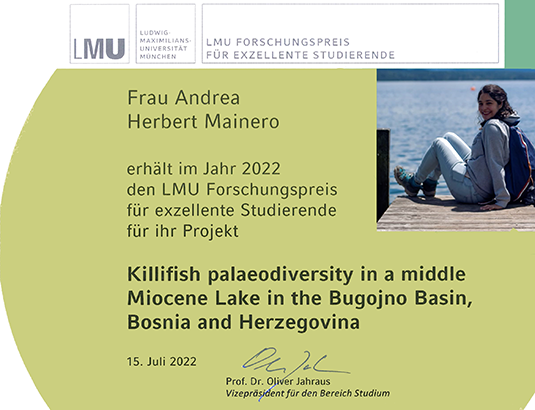 For her thesis, Andrea examined a collection of 177 fossils of small freshwater fishes all belonging to the species-rich „killifishes“, also known as „egg-laying tooth carps“. The fossils come from the Middle Miocene of Bosnia-Herzegovina (Eastern Europe), where they had been discovered and collected a few years earlier. In addition to extensive work in the lab and careful preparation of the specimens, Andrea Herbert Mainero used statistical approaches, various imaging techniques, including scanning electron microscopy (SEM), and comparative anatomy and osteology. Based on the data obtained from fossils and evaluation of scientific literature, she was able to assign part of the specimens to an extant family, whereas the rest was found to belong to an extinct lineage. Moreover, she described four fossil species new to science. Finally, Andrea’s work revealed an unexpected killifish diversity in the Middle Miocene (ca. 14–15 Ma) of Eastern Europe. However, the family comprising the largest number of species in Eurasia today (i.e. the Aphaniidae) appears to have been rather rare in the Middle Miocene, suggesting that a hitherto unknown profound shift in killifish diversity occurred sometime during the Late Miocene or Pliocene. Andrea Herbert Mainero’s master thesis gives significant new insights into the evolutionary history of Eurasian killifishes that will be investigated in greater detail in near future. A scientific paper summarizing her results is currently being prepared.