LMU scientists have identified mechanisms that make octocorals less sensitive to the effects of climate change than other kinds of coral.

Coral reefs are among the most species-rich ecosystems on the planet. Octocorals, which include soft corals, gorgonians, and sea pens, are important members of these marine communities. They could even outcompete reef-building stony corals in the future, as they are better able to deal with heat stress and increasing ocean acidification, which makes them less sensitive to the consequences of global climate change. Led by Dr. Sergio Vargas, scientists from the Department of Earth and Environmental Sciences at LMU have now been able to identify the molecular mechanisms behind this resilience. According to the researchers, their results could help predict the future of coral reefs with greater accuracy in the light of global climate change. 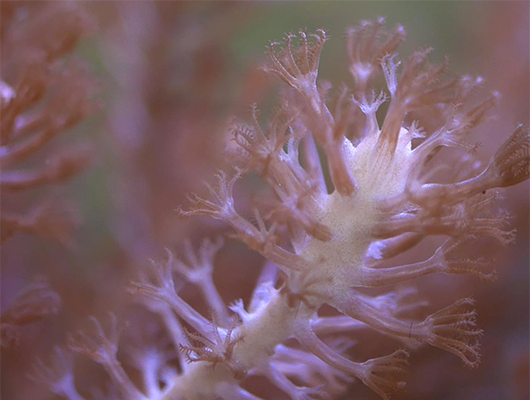 Observations have shown that octocorals proliferate under extreme conditions — such as after abnormally strong El Niño phenomena or in waters acidified by volcanic activity — and can come to dominate reefs. Unlike stony corals, most octocorals do not have a solid calcareous skeleton. Rather, they get their stability from small calcareous needle-like structures called sclerites. “We investigated the hypothesis that the resilience of octocorals to climate change is related to their ability to maintain calcification under difficult conditions,” says Vargas. “To this end, we characterized the skeletal proteins of the gorgonian species Pinnigorgia flava, which is widely distributed in the Indo-Pacific region, and, by means of lab experiments and analyses of gene activity, we investigated how heat and pH stress — in other words, the acidification of seawater — affected them.”

Their results showed that environmental stress had little effect on the calcification machinery of P. flava. Although heat triggered a stress response, this had no influence on the activity of genes that are involved in sclerite formation. Thus, the species was able to maintain production of all molecules that are necessary for the formation of new sclerites. With stony corals, this is not the case. As part of their stress response, these corals down-regulate the activity of genes that are involved in building the calcareous skeleton — that is to say, the stress response functions at the expense of the calcification machinery.

“Under long-term unfavorable conditions, the independence of sclerite formation from stress response could give the octocorals a competitive advantage over other kinds of corals, such as stony corals, and produce the changes in the makeup of communities that have been observed at many reef sites,” explains Vargas. “Understanding the variety of molecular mechanisms involved in resilience and how they are regulated in different reef organisms is therefore vitally important for predicting the future of coral reefs.