Some like it hot: Global warming triggered the evolution of giant dinosaurs

An international team of scientists found evidence that a rapid climate change some 180 million years ago probably triggered the evolution of the famous long-necked dinosaur giants. Their results were now published in the prestigious scientific journal „Proceedings of the Royal Society of Lon-don“.

When we hear the word dinosaur, most of us probably immediately think of giant animals with massive bodies, long necks and tails, and tiny heads. These „quintessential dinosaurs“ actually represent one prominent subgroup of the Dinosauria, the so called Sauropoda (‚longnecked dinosaurs‘ in popular culture). Sauropods were truly amazing animals, and included the largest landliving animals known, with body lengths of up to 40 m and weights of 70 tons or more. 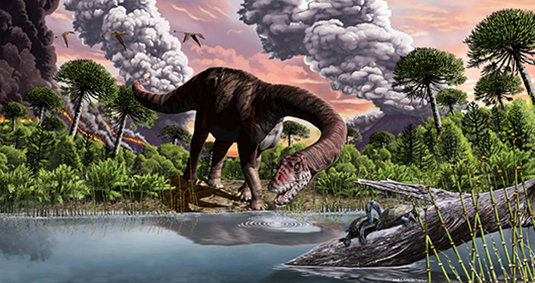 Reconstruction of the sauropod Bagualia alba in its environment: Image: Jorge Gonzales.

However, these giant animals did not appear directly at the beginning of the era of dinosaurs, some 230 million years ago. For the first fifty million years of their evolutionary history, the Sauropodomorpha - the lineage that the sauropods belong to - were represented by several groups of bipedal to quadrupedal animals. Although some of them reached already large body sizes of about ten meters in length and a few tons in weight, these groups also included smaller, and lightly built animals, some of which no larger than a goat. Furthermore, all of these animals had rather slender teeth, indicating that these planteating animals fed on rather soft and lush vegetation. However, towards the end of the Early Jurassic period, some 180 million years ago, all these groups suddenly disappear, and only one lineage survived and thrived - the sauropods. What caused this faunal change during the Early Jurassic has remained enigmatic so far.

An international team of researchers, led by Argentinean paleontologist Diego Pol and including Munich researcher Oliver Rauhut of the Bayerische Staatssammlung für Paläontologie und Geologie and the Ludwig-Maximilians-University, now report new evidence on what might have caused these changes in the prestigious scientific journal „Proceedings of the Royal Society of London“. In the province of Chubut, Argentinean Patagonia, they did not only discover the fossil remains of one of the oldest large sauropods known, which the team named Bagualia alba, but could also place it very precisely in its temporal and ecological context. Thus, the layers the new sauropod comes from could very precisely be dated as 179 million years ago, just after the mysterious disappearance of the other sauropodomorph groups, and finds of plant fossils in rock layers just before that time and at the time that Bagualia lived provide evidence for the climate and the ecology that these animals lived in.

Thus, the data indicate that there was a relative rapid change in climate about 180 million years ago, from a temperate warm and humid climate, in which a diverse, lush vegetation flourished, to a strongly seasonal, very hot and dry climate, characterized by a less diverse flora, dominated by forms showing adaptations for hot climates, such as certain conifers. These environmental changes were apparently driven by a greenhouse effect due to climate gasses such as CO2 and methane caused by increased volcanism at that time; evidence of these volcanic eruptions are found on many southern continents, such as the Drakensberge in southern Africa, for example.

With their slender teeth, the nonsauropodan sauropodomorphs were adapted to the rather soft vegetation flourishing before this global warming event, but when this flora was replaced by the much tougher greenhouse vegetation, these animals died out. The sauropods represented the only group of sauropodomorphs with a much more robust dentition, welladapted for such tough vegetation, and thus they flourished and became the dominant group of herbivorous dinosaurs at that time. Indeed the specialization for this kind of vegetation was probably one of the reasons why these animals reached their gigantic sizes: As large digestion chambers are needed to cope with such food, there was a general tendency for these animals to become ever larger.