A new dinosaur from Canton Schaffhausen – ancestor of the giants

An international team of palaeontologists recently described a new dinosaur from Canton Schaffhausen under the name Schleitheimia schutzi in the Swiss Journal of Geosciences. The actual study is based on older finds of a local collector and new fossils from an excavation in 2016. Schleitheimia lived about 210 million years ago in the early time of the dinosaurs and is - following the scientists - part of the origin of the sauropods. This is the group of reptiles that evolved into the long-necked giants, known today as typical dinosaurs by everybody.

When people hear the word "dinosaur", they probably immediately think of large animals with huge bodies, long tails and necks and a tiny head. Giants, such as Brontosaurus, Diplodocus or Brachiosaurus are long-necked dinosaurs, including the largest terrestrial vertebrates of all times, with skeletons of more than 30 m in length. However, they are already highly derived representatives of the sauropods – the scientific name of these long-necked dinosaurs – and only one of many groups of dinosaurs. The question of how such giants evolved from the rather small primeval dinosaurs and when and how the evolution of this group took place is still subject of intensive research. Of course, finds of early representatives of sauropods are of particular importance. 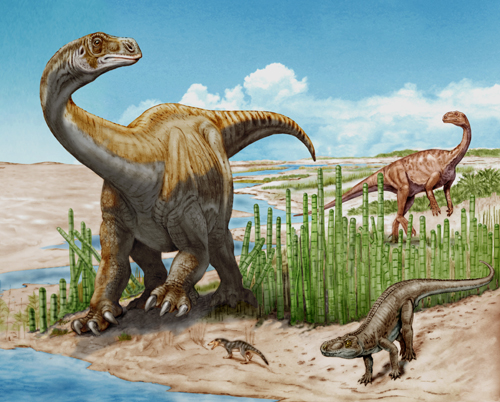 Reconstruction of Schleitheimia (foreground), with Plateosaurus in the background.

When examining some bones from Canton Schaffhausen in the collection of the University of Zurich, which had originally been identified as Plateosaurus, Munich palaeontologist Oliver Rauhut experienced a surprise: These remains did not all belong to Plateosaurus, but represent a previously unknown species of sauropodomorphs, which is evolutionarily already very close to the sauropods. This species has now been described by Rauhut and his colleague Femke Holwerda together with Heinz Furrer from the University of Zurich in the scientific journal "Swiss Journal of Geosciences" under the name Schleitheimia  schutzi. The name is derived from the small village of Schleitheim, where the remains were found in 1954, and from the name of the finder, the private collector Emil Schutz (1916-1974) from Neunkirch near Schaffhausen.

Although Schleitheimia probably still looked quite similar to the well-known Plateosaurus, this animal with an estimated body length of 9-10 m was already considerably larger than the latter, even though it did by far not yet reach the dimensions of its later relatives. Furthermore, the new species was obviously very robustly built and, like its gigantic descendants, probably moved on all fours, while Plateosaurus mostly walked on its hind legs. The analysis of the relationship of the new genus carried out by the researchers shows that Schleitheimia is apparently the closest known relative of the true sauropods, which indicates that this group must also have had its origin in the Late Triassic. Rauhut and his colleagues concluded that the early sauropods apparently lived next to their more primitive relatives for more than 20 million years. Only after the extinction of the latter towards the end of the Lower Jurassic did the sauropod success story begin, which was to make them the largest and, in many ecosystems, most important herbivores of the Earth's Middle Ages.

A new excavation in the immediate vicinity of the original site, initiated in 2016 by Heinz Furrer and the Naturforschende Gesellschaft Schaffhausen, brought to light further remains of sauropodomorphs and detailed geological data to explain the origin of the concentration of bones. In addition, further old finds by Emil Schutz from a neighbouring site also indicate the presence of a third, as yet undetermined species of early sauropodomorphs.

"As you can see, you don't always have to travel to exotic foreign countries to discover new dinosaurs and gain new insights into their evolution - sometimes a visit to the neighbouring museum or an excavation on your doorstep is enough," the Munich researcher says with a wink.