Bones reveal the secret of the exceptional long neck in giraffes

The giraffe with its exceptional body plan is an icon of evolutionary research. Its long neck, in particular, has puzzled researchers for centuries. Almost all mammals including mice, humans and giraffes, have seven cervical vertebrae irrespective of the neck length. In contrast to the constant number of bones, it appears that the vertebral shape at the neck-trunk transition is significantly different. 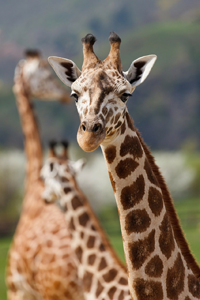 A classic anatomical study published in 1908 noticed peculiarities in the shape of the giraffe’s first thoracic vertebra. It further proposes that the bone, thus, contributes to the lengthening of the neck. Testing this hypothesis in a broad phylogenetic perspective has only become possible recently by the means of novel technologies. The scientific team jointly lead by Dr. Christine Böhmer (Palaeontology & Geobiology and GeoBio-Center of LMU) and her colleague Prof. John Nyakatura (Humboldt-Universität zu Berlin) report on the results of the study in the journal Evolution.

In a first essential step, hundreds of vertebrae of the giraffe and other related artiodactyls such as sheep, antelopes, camels and llamas were scanned and three-dimensional (3D) computer models of the bones were created. The comprehensive skeletal material was made accessible by many natural science collections in Europe, and the collected data is now made freely available (Open Access) by the authors as digital bone library.

The bone shape analysis using state-of-the-art statistical methods revealed that the giraffe’s first thoracic vertebra is indeed unique among all compared species. While bearing ribs – the defining characteristic of a thoracic vertebra - the bone resembles a cervical vertebra in the giraffe. This raises the question of the peculiar bone shape affects the function of the vertebral column. Powerful animation software that is commonly used in the movie industry allowed to simulate the motion between the vertebrae. The measurements from the almost 40 different species showed clearly that the range of motion at the neck-trunk transition is largest in the giraffe. The present study provides first quantifiable support for the one-hundred-year-old hypothesis that the first thoracic vertebra contributes to the functional lengthening of the giraffe’s neck.  

In addition to the unique anatomy of the giraffe, the research team found convergent features in the vertebral column of long-necked species as well as previously unknown peculiarities in short-necked species. In a future study, the data set will be expanded by including more fossil bones of extinct relatives. Today’s biodiversity provides only a snapshot of the variation that has evolved exponentially since the origin of life on Earth. Evidence for the lost diversity is only preserved in fossils and, thus, it is essential to consider living as well as extinct species to gain a complete picture of evolution.

Animation of the vertebrae (giraffe and okapi)