All eyes on the oceans

The UN's Decade of Ocean Science for Sustainable Development formally opens on February 15. In the following interview, Professor Gert Wörheide tells us why the oceans urgently need more attention.

Professor Wörheide, what does the UN's Decade of Ocean Science for Sustainable Development intend to achieve?

The UN has designated 17 sustainable development goals as vital for peace and prosperity on the planet. Goal No. 14 focuses on marine life (“Life below water”), and is concerned with ensuring that the oceans and marine resources can be conserved and sustainably be used. The Decade of Ocean Science was initiated by the UN with the aim of making further progress towards the achievement of this goal, and increasing awareness of the global significance of the oceans and marine research. The initiative is not an umbrella organization to oversee research in this area. Its main purpose is to stimulate wider and more effective coordination of research and use of research data, and to encourage greater integration with the political decision-making processes. I am very curious to learn how this all pans out in the coming years. 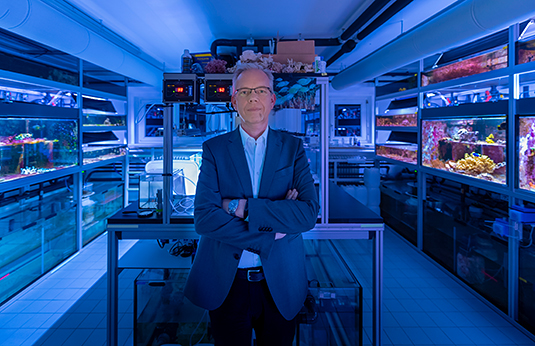 What services do the oceans provide for the Earth and its inhabitants?

The oceans constitute the largest biome on our planet. They occupy over 70% of the Earth's surface, and provide a gigantic habitat for life. Life began in the ocean and was restricted to the seas until about 400 million years ago. Today, the oceans supply humans with food resources, they absorb part of the carbon dioxide that we produce, and their capacity for heat uptake buffers to some extent global warming.On the other hand, the ongoing rise in global temperatures and the overexploitation of marine resources are having an increasingly negative effect on the health of the oceans. Fish species are migrating out of the tropical zones, and their loss interrupts food-chains on which many densely populated countries urgently depend. Coral reefs are the habitats with the highest species diversity in the ocean. However, they are threatened with extinction globally, owing to what's called coral bleaching, which is itself mainly caused by the rise in the sea surface temperature. Things do not look too good for the oceans of the future, but we still can't predict exactly which path they will follow. That's why we need as much marine research as possible in order to assess the resilience of the oceans and their biodiversity to global change and increased exploitation, and learn how we can sustainably use the ecosystem services and resources they provide.

What major changes can be observed in marine ecosystems at the present time?

Some of my colleagues predict that by the middle of this century, there will be more plastic than fish in the oceans. Particularly with respect to the effects of global warming and overexploitation, many resulting processes and consequences in the oceans are not fully understood yet. For example, even baseline data about the magnitude of species diversity in the oceans and the ecological services they provide is still deficient. Consequently, for example, we cannot fully assess which natural products and services these organisms could provide in the future for the development of drugs or biomaterials for human benefit. These are only some examples that are crucial in deciding how we should proceed with the development and implementation of conservation and management strategies for the sustainable utilization of marine resources.Another example are plans for the mining of minerals, such as manganese nodules, from the deep sea-floor of the Pacific, where the first claims have already been staked out. But it is still not clear what impact these activities have on deep-sea habitats and their organisms. The environmental conditions in the deep sea are very different from those in shallow water. When mining activities stir up clouds of sediment, the particles can remain in suspension for months, before they sink to the bottom and bury all life on the sea-floor. Apart from economic arguments, it is vital that the ecological consequences – based on assessments with modern research methods – be given greater weight.

Have you set concrete targets for you own research during the Decade of Ocean Research?

At the GeoBio-Center of the LMU in Munich, we are primarily concerned with research on marine biodiversity and biodiversity genomics. In other words, we study the species composition of habitats and how they change, with the aim of drawing conclusions relevant to the population biology of these ecosystems. We mainly focus on the Mediterranean and coral reefs of the tropical Indo-Pacific. The migration of species from their natural habitats as a result of climate change, and its effects on newly forming populations, are among the topics we are now studying. Biodiversity genomics, on the other hand, provides insights into the evolution, adaptability and the distinctive characteristics of organisms.In the context of the UN's Decade of Ocean Research, I am involved in the new European Reference Genome Atlas (ERGA) Initiative. Its goal is to sequence reference genomes for all European organisms. The resulting Reference Genome Atlas will serve as a significant research tool, and will allow us to derive deep insights to assess the potential for adaptation of organisms to climate change or overexploitation, and use the data to improve the conservation of biodiversity. Here too, of course, marine lifeforms play important roles.

What are you working on at the moment?

Among other things, we are investigating the effects of heat stress on the formation of the skeletons of corals. We are particularly interested in gaining a fundamental understanding of the underlying processes at the molecular level. Corals are responsible for building the three-dimensional structures of coral reefs, which are essentially made up of their calcium carbonate skeletons. We still don't fully understand how heat stress affects the formation of the skeleton in these animals. Do they grow at a lower rate, or not at all, when the seawater heats up to non-lethal/bleaching levels? The answers to questions like this can inform us for how long corals can secrete enough calcium carbonate to sustain coral reef growth under projected rising sea surface temperatures.

Have you been able to pursue your research in spite of the pandemic?

Over the past 20 years or so, we have undertaken regular research expeditions and field trips with students to coral reefs in the tropics, to the Red Sea, the Maldives, and Indonesia, for example. At the moment, however, research and teaching on the coral reefs in these countries are not possible for foreigners.But in a way, we are lucky. When came to Munich, I began to set up coral reef aquaria in the basement. We have now established large research aquaria in which we can culture corals, sponges and other organisms and continue with our research. So, we're not wholly dependent on expeditions to the real coral reefs, because we can simulate conditions and situations pretty well in our home aquaria, and that has been of great benefit for our research and teaching during the pandemic.

In 10 years, we will hopefully have learned a lot more about our fantastic oceans. I am confident that we will gain new insights that can make a significant contribution to enabling humankind to use the world's marine resources in a sustainable manner. I also hope that the Decade of Ocean Science will draw more attention to marine scientists and their research, and that we will be able to reach out to more people who are otherwise not fully acquainted with the plight of the world's oceans.