In another fascinating snapshot from deep time, an international team of paleontologists has reported the discovery of specimens of a minuscule crustacean that dates back to the Cretaceous (about 100 million years ago), conserved in samples of amber from Myanmar.

Tomographic reconstructions of a female of the Cretaceous ostracod crustacean Myanmarcypris hui. Upper left: the tips of both pairs of antennae can be seen extending from the front of the strongly ornamented bivalved shell. Upper right: inside the shell (now transparent) some of the appendages can be seen, as well as eggs (green) and the sperm receptacles (purple). Lower right: reconstruction of the paired sperm receptacles. Lower left: one of the sperm receptacles in more detail, filled with filamentous giant sperms. Image by He Wang

The most spectacular find is a single female, which turns out on closer examination to contain giant sperm cells in its reproductive tract. In fact, this is the oldest fossil in which sperm cells have been conclusively identified. Moreover, the specimen represents a previously unknown species of crustacean, which has been named Myanmarcypris hui. M. hui was an ostracod, as clearly indicated by the paired calcareous valves that form the carapace, whose form recalls that of a mussel shell. Ostracods have been around for 500 million years, and thousands of modern species have been described. They are found in the oceans and in freshwater lakes and rivers. Fossilized shells of these crustaceans are by no means rare, but the specimens preserved in Burmese amber reveal details of their internal organs, including those involved in reproduction. “The finds gave us an extremely rare opportunity to learn more about the evolution of these organs,” says LMU geobiologist Renate Matzke-Karasz, who played a major role in the morphological analysis of the fossils. 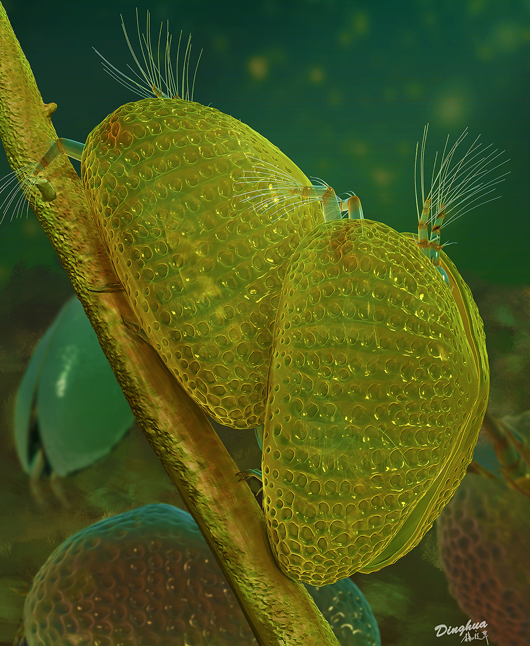 During the Cretaceous period, ostracods must have lived in the coastal and inland waters of what is now Myanmar, which were fringed by forests dominated by trees that produced huge quantities of resin. The newly described specimens are among the many organisms that were trapped in the oozing blobs of the gooey substance. In recent years, the amber found in the province of Kachin has yielded a spectacular trove of fossils, including frogs and snakes, as well as part of a putative dinosaur (according to new evidence, that specimen may actually represent an unusual lizard). Over the past 5 years, hundreds of previously unknown species have been described based on these inclusions. Indeed, many of them have forced evolutionary biologists to reconsider conventional hypotheses concerning phylogenetic and ecological relationships. 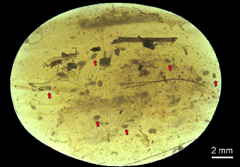 Beside a few insects, thirty-nine ostracod crustaceans were entrapped in this tiny piece of Cretaceous amber found in Myanmar. Image by He Wang & Xiangdong Zhao

The new ostracod specimens were analyzed with the aid of computer-assisted 3D X-ray reconstructions. The images revealed astonishing details of the anatomy of these animals, ranging from their tiny limbs to their reproductive organs. – And in one female specimen, Matzke-Karasz and her colleagues discovered ripe sperm. The cells were discovered in the paired sperm receptacles in which they were stored after copulation, ready for release when the female’s eggs matured. “This female must have mated shortly before being encased in the resin,” says He Wang of the Chinese Academy of Sciences in Nanjing. The X-ray images also revealed the sperm pumps and the pair of penises that male ostracods insert into the twin gonopores of the females.

The finds in Burmese amber provide unprecedented insights into an unexpectedly ancient and advanced instance of evolutionary specialization. “The complexity of the reproductive system in these specimens raises the question of whether the investment in giant sperm cells might not represent an evolutionarily stable strategy, says Matzke-Karasz. The males of most animal species (including humans) produce very large numbers of very small sperm. Comparatively few animals, including some fruit flies – and of course, ostracods – have opted for a different approach. They make a relatively small numbers of oversized sperm, whose motile tails are several times longer than the animal itself.

“In order to prove that the use of giant sperm is not an extravagant whim on the part of evolution, but a viable strategy that can confer an enduring advantage that enables species to survive for long periods of time, we must establish when this mode of reproduction first appeared,” says Matzke-Karasz. Examples of fossilized sperm cells are extremely rare. The oldest known ostracod sperm (prior to the new discovery) are 17 million years old, and the previous record age, 50 Myr, was held by a species of worm. The new evidence extends that age by a factor of at least two. The fact that animals had already developed giant sperm 100 million years ago implies that this reproductive strategy can indeed be successful in the (very) long term, Matzke-Karasz points out. “That’s a pretty impressive record for a trait that requires a considerable investment from both the males and females of the species. From an evolutionary point of view, sexual reproduction with the aid of giant sperm must therefore be a thoroughly profitable strategy.”